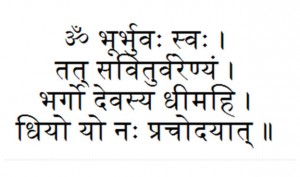 The famous gayatri mantra that almost every Hindu knows first appears in the Rig Veda (iii /62/10). In roman letters it is as follows:

Literally hundreds of books and web pages are currently dedicated to explaining the esoteric meaning of this mantra, so there is no need to repeat that discussion. Instead, here is a basic grammatical explanation. Gayatri is actually the name for a Sanskrit poetical meter that contains three lines of eight syllables each making a total of 24 syllables. Consequently, there are many gayatri mantras even though this particular one is the oldest and most well known. In Hinduism all gods and goddesses have a gayatri mantra. There is therefore, a gayatri for Ganesha, one for Shiva, one for Durga, one for Vishnu, one for Lakshmi, and so on. Many people are unaware of this so and when Hindus talk about gayatri mantra they mean thee gayatri mantra shown above, which is addressed to Savitri, the sun. Surprisingly, first line: om bhur bhuvah svah is not actually part of the gayatri mantra. It is a special utterance called vyahriti that has been added to the beginning. Therefore, the three lines of gayatri are:

Here is a word-for-word breakdown

The deity associated with this gayatri, as we mentioned, is the sun, savitri. (The second word of the mantra.) The more common name for the sun is surya. Generally “surya” is the name for the sun while it is above the horizon while savitri is the sun as it is rising and setting. Here is a simple word association that explains a lot about the Hindu way of seeing the world: “the sun equals light, which equals knowledge, which equals consciousness.” This association applies not only to the gayatri mantra, but also to the design of temples and homes, and to details such as why we circumambulate and offer incense and lamps in a clockwise direction. In essence Hinduism follows the path of light.

The most important word in the gayatri mantra is the word, “tat,” which means “that.” It is a reference to “that One,” God. According to the word association mentioned above, the sun, which is the source of illumination, heat, food and so many other things, can naturally be seen as the “representative” or symbol of God in this world. There are two verbs in the gayatri mantra, dhimahi and prachodayat. The first verb, dhimahi means, “let us meditate.“ So, “let us meditate on the light (bhargo) of the sun which represents God.” This is the basic meaning of the first part of gayatri.

The second verb, prachodayat, literally means , “it should push,” but in more poetic language it can be translated as “let it inspire.” Dhiyah are “thoughts,” so dhiyo yo nah prachodayat means, “may our thoughts be inspired” So the most literal meaning of gayatri is, “Let us meditate on the light of the sun which represents God, and may our thoughts be inspired by that divine light.”

As with most things, the gayatri mantra is also personified as the goddess, Gayatri Devi. She is the wife of Brahma and is pictured with five heads sitting on a lotus. She is the embodiment of the supreme brahman. You will also see other depictions of Gayatri Devi that vary somewhat. Many people assume that she is the object of the gayatri mantra, but this is not so. It is the sun instead.

The gayatri mantra is traditionally whispered into the ear of a young boy in a ceremony called the Thread Ceremony (upanayana), which is one of the rites of passage followed by many Hindus. In addition, the gayatri mantra is repeated during daily prayers performed three times a day while facing the sun, at sunrise, at noon and at sun set. It is also common to recite the gayatri as part of a havan, or to recite it in a collective way in temples or homes.

As it was mentioned the first part of the gayatri mantra, om bhur bhuvah svah, is called vyahriti or the “great utterance,” and it  is always repeated along with the mantra. The word om is a auspicious sound made at the beginning of many prayers. The words blur, bhuvah and svah are technical, but one way to think of them is as a “call to creation,” that the light of the sun (the light of God) shines on the earth (bhur), in the sky (bhuvah), and in space (svah), and therefore, “let that light also shine on me.” On another level the vyahriti has to do with subtle practices of meditational yoga.