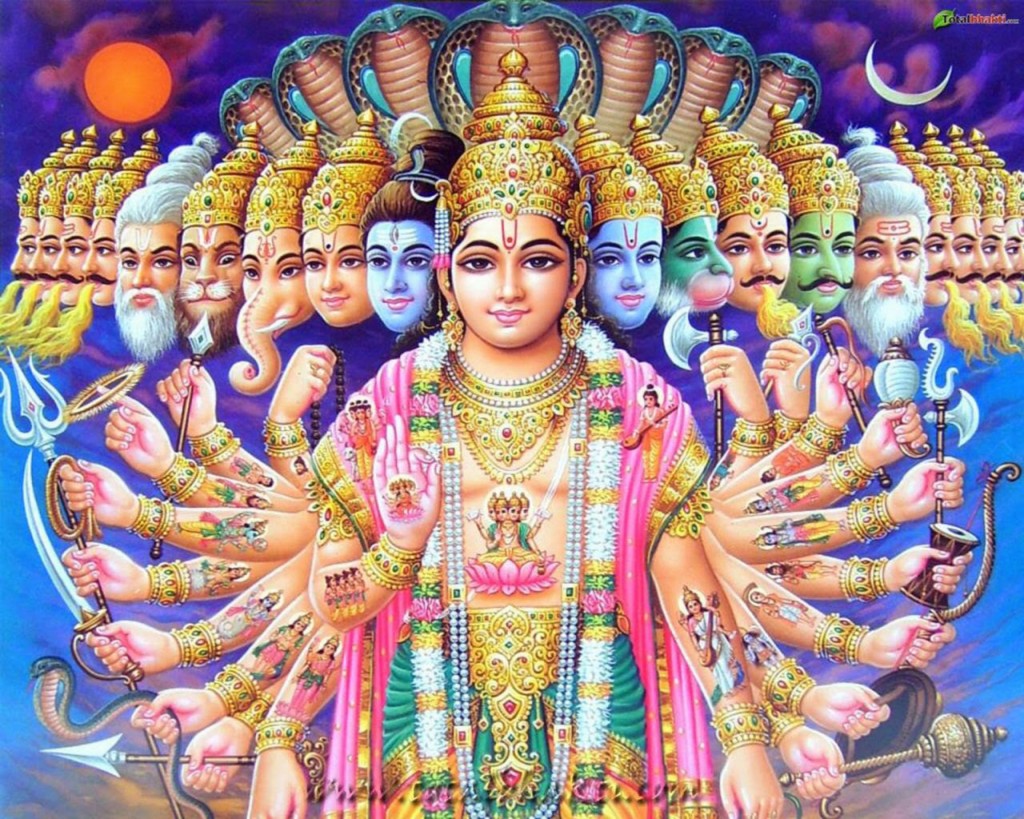 As surprising as it may seem, Hinduism has no one word “God” as English does. Instead, it has many words that each describe a certain understanding of God. This is something like in many Eskimo (Inuit) languages there is no one word for snow, instead there are many words, each describing snow in its various varieties, as wet, dry, iced, melting, slushy, and so many other forms that people who do not live with snow cannot imagine. In a similar way, Hinduism is rich in theology and so there are many words for God. Yet, if we needed to suggest a fast equivalent probably the word Bhagavan might be the easiest equivalent to God in English.

There is a famous verse from the Bhagavat Purana, (1.2.11) a popular devotional text, that gives a good understanding of how “God” is generally understood in Hindu terms. The text begins by saying that God is beyond human understanding, No words or human conceptions can even begin to touch God, none the less, humans have three basic and limited ways in which they try to conceive of God. These three ways are as brahman, as paramatma and as bhagavan. Brahman is God as raw energy, as force. It is an impersonal understanding of Divinity. Paramatma is God as indwelling spirit, a kind of generic presence that exits within all things. Bhagavan is God in personal terms, as Krishna, Rama, Shiva, Lakshmi, Durga and the myriad of other Gods and Goddess. In this way, as impersonal force, as indwelling spirit and as transcendent personality, human beings conceive of the Divine. According to the Bhagavat Purana such understandings are universal categories of divine “seeing” and we suggest that they are expressed in one form or another within all religions.

Here are a few basic “God terms” that are commonly used within Hinduism:

Indeed Sanskrit has many many such words to describe God. These are at least some of the more common ones that most people may hear.

Divinity as one Desires

There is one more concept of Divinity that is worthy of note. This is the concept of ishta devata, or one’s personal way of perceiving Divinity. Ishta means ” desired” and devata means “divinity,” and so ishta devata can be roughly translated as, “Divinity as one desires.” If you recall the term adhikara, which meant that each person is at a unique place in spiritual evolution and therefore has “rights” to a certain level of spiritual awareness, in a similar way, God, being limitless, can be approached in an infinite number of ways according to the adhikara of the individual. Each individual has the right, therefore, to conceive of and worship God according to his or her unique position and pychology. How this plays-out in practice is most interesting. Some people, for example, will want to worship God in a very personal and direct way and so they will focus on the worship of a specific personal form of God; perhaps as Rama or Krishna. Even within this personal approach of worsphip some people will want to worship only Krishna in one of His childhood forms, as baby Krishna (Gopala) or as the young Butter Thief (Makhan Chora). There is a huge number of devotional texts devoted to Krishna as the Butter Thief. Others may prefer to see their personal God as Shiva, Ganesha or in female form as Devi. Others, however, may consider the worship of a personal God to be limiting and prefer to approach Divinity in more abstract terms, as brahman or paramatma, for example. Consequently, there is room for huge differences between individuals according to the principle of ishta devata, and from a Hindu perspective of Divinity, there is no conflict.