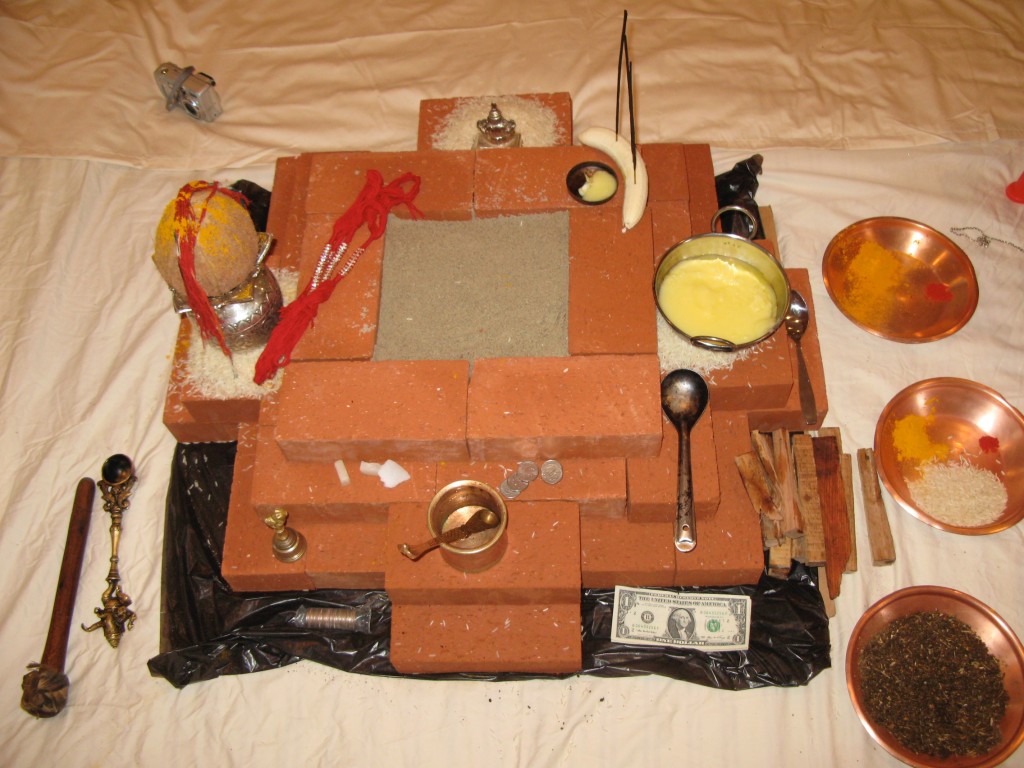 A havan or homa is similar to a puja in the sense that both are common modes of Hindu worship and both are symbolic forms of communication. The words havan and homa each derive from the Sanskrit root hu, meaning to consume. Generally, the word havan is heard in North India and homa is used in South India, but in either case, the meanings are identical. I will use the word havan, but I could just as easily use the word homa.

A havan is a religious ceremony performed in temples and in homes that involves worship through the use of a sacred fire. The use of fire as a means of worship is the most ancient of all rites, going back to the earliest Vedic times. This fire ritual is described in elaborate detail in the Brahmanas. From the earliest of Vedic times and even to present day, fire (Agni) was viewed as the chief of the Gods. In fact, the first verse of the Rig Veda is addressed to Agni, the fire God. “I praise Agni, the chosen Priest, God, minister of sacrifice… .”

In ancient times the fire sacrifice was an elaborate ceremony that could involve the sacrifice of horses, cows and goats, as well as gold, gems and other precious items into the fire. Today, a havan is a simplified ritual that rarely involves animal sacrifice or the placing of precious items into the fire. Instead, rice or a kind of popery is commonly substituted for these items, but still the basic meaning of the ritual remains. This may sound odd or glib, but an easy way to think of the havanis as a symbolic “postal system.” The fire container is the postbox, fire is the postman, the items placed into the fire are the message and mantra is the means of address. Generally, wood and clarified butter (ghee) are used as the fuel. The fire container, which may be brick or metal, is called a kunda, and when made of brick it is built to specific dimensions and shapes according to the purposes of the ceremony. For home use, generally a small metal havan kunda is used instead of a brick one because of its ease of setup and portability. In a formal situation, a brick kunda will be used. Kundas have different shapes: square, rectangular, round and triangular, but in most cases the square kunda is used. 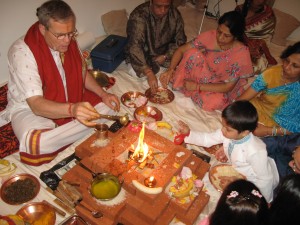 A havan ceremony involves a priest and a host(s) and guests sitting before the kunda while mantras are recited and various items such as ghee, rice, herbs, foodstuffs, and other items are placed into the fire. Through the mantras, fire, is asked to take the prayers and consumed offerings (hence the meaning of hu “to eat”) to the intended Divinity. For example, if one wanted to perform a havan for increased health, one could direct the offerings to the sun Deity, Surya. If one wanted rain, one might direct their prayers and offerings to the rain Deity, Indra. If one wanted to increase luck and general prosperity one could direct Agni to take the offerings to Ganesha and Lakshmi, two Divinities in charge of luck and fortune. In this way, during a havan many Deities may be propitiated with a specific focus on just one or two, depending on the purpose.

Puja and havan can also be combined. In fact, this is most common. For example, a ceremony could begin withpuja to a sacred image of Ganesha and then a puja using a copper pot, coconut and leaves to Varuna and then go on to include a havan directed towards Vishnu, Shiva and Durga Devi. In common speech the complete ceremony would be called a puja, but in fact there are many pujas and many havans all combined into one.