Why are certain trees and plants as sacred?

In Hinduism all of life is sacred and one of the highest qualities to aspire to is non-harming, ahimsa, but it is true that certain trees and plants, as well as certain animals and certain rivers or even mountains are viewed as especially sacred. The tulasi plant is especially regarded as sacred amongst Vaishnavas. Within the Shaiva community bael leaves are particularly sacred. Trees like the fig or the bodhi tree are generally sacred to all Hindus. Similarly, rivers like the Ganga (Ganges) are sacred to all Hindus, but in different part of India the local rivers are sacred to a particular region. In the south, for example, the Godavari and Kaveri are most sacred. In the north these rivers may not be known. Mountains such as the Himalayas are sacred to all Hindus, but again in different regions local mountains or hills may have particular significance although they may be unknown outside of that region. The Venkata hills north of Chennai (Madras) are sacred to Vaishnavas who visit the famous temple to Balaji that sits atop this great set of hills. Outside of this region these hills are unknown. And of course along with every sacred object, there is a sacred story explaining the divine origins of that object.

Here is a simple anecdote that further illustrates what is meant by the sacred in Hinduism: Puja is always to be performed with sacred waters, particularly Ganges water, the water most sacred in India. However, it is not always possible to get Ganges water in America. In order to solve this problem there is a special sacred waters “calling” mantra that can be repeated at the beginning of the puja to convert ordinary tap water into sacred waters. This mantra lists many of the sacred rivers of India, but sometimes the mantra is expanded to include the Colorado River as well as the rivers of India. There is no contradiction here, the Colorado River is a sacred river. In fact all the rivers in America are sacred. Where one lives is sacred land. Hinduism views the whole world as sacred. Seeing the sacred is a state of mind.

Why do we consider the lotus special? 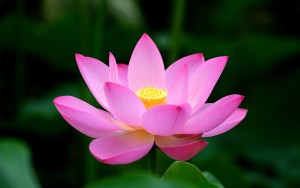 The lotus has huge symbolic importance within Hinduism. We see that many Gods and Goddesses stand on the lotus. The best example is the Goddess of Wealth, Lakshmi Devi. See the illustration. Even more, however, we often hear of lotus feet, lotus eyes, lotus hearts, lotus seats, and so on. The best explanation for the symbolism of the lotus comes from the Sanskrit word for the lotus, panka-ja. “Panka” means mud and ja means “born.” The literally meaning is “born from the mud,” and yet if you have ever seen a lotus it is the most amazing flower! The closest flower that I can think of that approximates the lotus is the water lilly, but a real lotus far outshines the water lilly. The idea is that even though the lotus has its roots in the mud of the pond from which it grows, it is ever unsullied as it floats on the water above the pond, and any drop of water that touches the lotus immediately slides off. The lotus is ever pure and aloof from the world. It is in the world, but not of the world. This is the symbolism of the lotus. So when the Goddess Lakshmi stands on a lotus, the meaning is that she understands the problems of the world, but she is not sullied by this world. She is absolutely pure. Similarly, a guru’s feet are often said to be lotus feet indicating his purity and detachment from the world. If someone is said to have lotus eyes it means that their eyes and eye brows have the shape of the lotus petal. This is a great compliment!

Who do we show respect to cows? 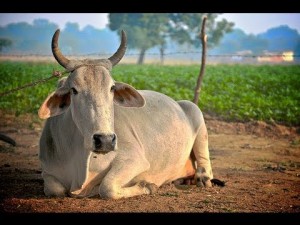 Cows like other sacred animals mentioned in the previous answer are sacred because all life is sacred in Hinduism. However, the added factor regarding cows is that in ancient times and even now in much of rural India, cows form the economic basis of an agrarian society. The cow gives milk, butter and oil for cooking. The bull plows the land for grains. The cow and the bull provided fertilizer to refresh the land. Dried cow dung was used as fuel for cooking and heating. The cow and the bull provided many of the necessaries of life. In addition many modern Hindu commentators speak of cow’s milk as having special nutrients that make it idea for spiritual life. The cow is considered one of the seven “mothers” in Hinduism and the bull is the emblem of dharma. There are many references to the four legs of the bull as the four pillars that support dharma: cleanliness, austerity, truthfulness, non-harming, and so of all animals, the cow and the bull have taken on the greatest significance within Hinduism.