Why do we do aarti?

A better question is, what is aarti? The word aarti is not Sanskrit, so we know nothing about the derivation of the word. Aarti, however, is simply the offering of articles of worship to a Deity, the primary object being a lamp. An aarti can be performed formally in a temple at a scheduled time with a priest, or informally in a person’s home after a puja such as a Satya Narayana katha. A priest can offer the aarti or devotees themselves can do it. An aarti tali is a tray that people hold that contains the flame that is offered during aarati. Each Deity has its own aarti song that is sung during the offering of the lamp. See the illustration.

Why do we offer food to the Lord before eating it?

Anything offered to God during puja or worship falls under the category of bhoga. The word bhoga means enjoyment and pleasure. In other words, while worshipping we offer enjoyable, pleasing things, to the Deity, such as fragrant incense and flowers, nice cloth, jewels, fresh milk, delicious foods, and so on.  All of these things are different forms of bhoga, enjoyment. Once these things have been offered they cease to be bhoga, but instead become prasada. The word prasada means mercy, grace, and blessings. So once an article of bhoga has been offered to God it become prasada, a form of blessings or mercy. So we might say that during worship we offer enjoyment to God and receive blessing in return. Receiving blessings is a good thing! And so we offer food to God before we eat so that our eating is not just ordinary eating but “spiritualized” eating. And as they say, we are what we eat!

Why do we offer lamps to God? (Aarti)

Virtually every puja includes the offering of a flame to a Deity. This is aarti. This lamp is usually made with a ghee wick or a camphor (kapoor) flame. There are two basic reasons why a lighted lamp is offered. The first is purely practical. In ancient times the lamp provided illumination to see the Deity since electrical lights were not available. The lamp would be offered to the feet of the Deity, then slowly moved up to illuminate the knees, the waist and the chest, to finally illuminate the face. This would allow meditation on each part of the Deity starting from the feet. 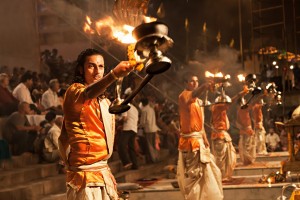 The second reason is purely symbolic and goes back to our metaphor: the sun equals light, which equals knowledge, which equals consciousness, which equals liberation. Think of the flame as a kind of bhoga which then becomes a prasada after being offered to the Deity. The flame is then presented to the worshippers who sweep their hands across the lamp in a gesture that suggests “scooping up” the light and bathing their eyes, face and head with the blessings of knowledge, etc. In an interesting side note, when a ghee wick is prepared usually two wicks are twisted together. The two wicks combined make a larger flame and one that symbolically represents the soul and God (atma and the paramatma), combined.