Blowing a Conch and Ringing Bells,  Chanting Shanti and Reciting of OM

Why do we blow a conch? 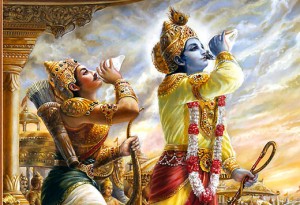 In the Bhagavad-gita it is described that at the beginning of the great battle Krishna Bhagavan blew his divine conch and then was followed by Yuddhisthira, Bheema, Arjuna, and so on, who also blew their conches. The sound of the conch is the sound of victory and success. Often a conch is  blown at the beginning of temple aartis and other programs as an auspicious sound to invite victory and success. At the end of a wedding a conch is sometimes blown as the the newly married couple walk down the aisle. In some parts of Southern India, however, a conch is blown at funerals and so would not be appropriate to be blown as auspicious events. 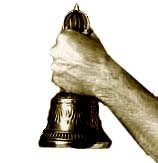 It is common to ring bells in temples during puja and aarti. A priest, for example, will ring a bell as puja is performed. This is to signal that a puja is taking place and people should pay attention. Bells are rung during aarti for similar reasons and to create a pleasing musical effect on the mind. Sometimes a bell is positioned at the entrance to a temple so that devotees can ring the bell as they enter the temple. The temple is the house of God and  so it is only polite to make a sound before one enters. Don’t we always knock before entering someone’s home? Besides, ringing bells is fun.

Why do we say shanti at the end of a havan? The word shanti means peace and it is recited not just at the end of havans, but also at other times during most pujas. There is a well known Vedic prayer called Shanti Patha that asks for peace throughout creation that is commonly recited at the end of havans. Here is a translation: “May we find peace in the sky above us and in the highest reaches of heaven. May we find peace on land and in the waters. May all herbs and the food that sustains us bring us physical and spiritual peace. May we find peace in every region of this divine creation. Let us seek ultimate peace in that Supreme God. Let peace reign throughout the world!”

Why do we chant Om?

At its most basic level the word “om” is a solemn affirmation and respectful assent somewhat on par with Amen in the Jewish and Christian traditions. Om is uttered at the beginning and end of sacred prayers. The word first appears in the Upanishads as a mystical sound and the object of deep meditation. There are, of course, many works written on the significance and meaning of this sound. Most commonly it is divided into three parts a, u, m, and meaning is been given to each part. In the Mandukya Upanishad the letter “a” represents waking consciousness, the letter “u” represents dream consciousness, and the letter “m” represents the consciousness of deep sleep, and finally the whole word is said to represent a 4th state of consciousness which is unknowable, unspeakable and “into which the whole world passes.” Another interpretation equates “a” with Vishnu, “u” with Shiva and “m” with Brahma. Yet another interpretation equates Om with the Greek, “logos,” “the word”, found at the beginning of St John’s gospel. Others suggest that the syllable Om should not be analyzed or interpreted at all, that it just is. The simplest understanding is that the sound of Om is the sound of God.