Imagine a great tree. There is a large root at the base and a huge trunk that rises up from this central root to spread out into a network of main branches and then into a mass of successively smaller branches. Every part of the tree grows out of this one central root. Now imagine a river. A river is formed when a series of rivulets converge to form streams that in turn converge to form increasingly larger streams that eventually join to form a main waterway.

Hinduism can be imagined to be a large river system. Buddhism, Christianity, Islam and many other religions can be imaged to be great trees. Buddhism, Christianity, and Islam rise up from a single source, a Buddha, a Christ, a Muhammad and then grow out from a few main branches that in turn spread out into many smaller branches. In Christianity there are three main branches that grow off the main trunk of Christ: Orthodoxy, Catholicism and Protestantism. Each of these main branches in turn split off into many smaller branches. In the case of Protestantism, there is the Lutheran branch, the Anglican branch, the Baptist branch, and so on. Similarly, for Buddhism there are the main branches of Mahayana and Theravada Buddhism. For Islam there are the Sunni and Shiia main branches of Islam. The tree model of religion is the way the majority of people think of religion.

Hinduism, on the other hand, has no single source and does not, therefore, follow the tree model of religion. To think of Hinduism in the same way that one thinks of Buddhism, Christianity or Islam, is a mistake. Hinduism has no single Buddha-like, Christ-like or Muhamand-like founder, who forms the starting point or root. Instead, there are many streams, separate religious traditions, which combine to make a much larger multi-layered and complex conglomeration of traditions. In general there are four major streams that converge and flow together forming what today we call Hinduism: the Shaiva stream, the Shakta stream, the Vaishnava stream and a huge number of folk streams. We often hear that there are 3,333,000 Gods in Hinduism and to the Western mind this seems absurd. Spend just a few hours walking in the streets of any Indian city, town or village and one will meet a dizzying array of Gods and Goddess in street-side temples and shrines. Yet all of these divinities arise from one of these four basic streams. Most Westerners can hardly imagine the complexity of divine manifestations that appear in India. So one might ask how can such a complex mixture of traditions exist with so many Gods and Goddesses without a unifying root. The answer is simple: there is indeed a unifying root, but instead of it being an historical personality, a Buddha, a Christ or a Muhammad, it is a unifying idea. The oldest of Hindu texts, the Rig Veda, gives us the key to understanding the complexity of religious streams that comprise the river of Hinduism:

This short and simple verse is profound in its implications. In just five words the vast and seemingly complex world of Hinduism is described. Ekam means “one.” Sat, is “God.” Viprah means “the learned.”Bahudha means “many” and vadanti means “they say.” Thus, “The wise speak of God as One and Many.” This is the key to understanding the Hindu way of seeing virtually everything. 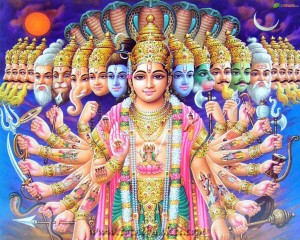 This way of seeing reality simultaneously ranges from plurality to oneness, from polytheism to monotheism and everything in between. When a Hindu enters a temple and sees a dozen different Deities that person sees both diversity and oneness. The plurality of divinities are simply different “faces” or manifestations of the One. Another word that is used in Sanskrit to describe this oneness is purnam, which means complete or full. Thus God by very definition is complete and full; God is all things. This is the oneness, and yet this oneness manifests in an unlimited number of “expressions,” “faces” or “personalities,” the bahudha, the many. These are the Gods and Goddesses of Hinduism. The forms of Vishnu, Krishna, Shiva, Ganesha or of the Goddesses Lakshmi, Sarasvati and Durga are simply multiple faces of the One. This is how most Hindus see the world.

There is a wonderful dialogue in the Brihad Aranyaka Upanishad that illustrates this point. There, a student asks a renouned teacher, how many Gods there are and the answer comes back, “My dear son, there are but 3,306 Gods.” At first the student is happy to hear this answer, but then he wonders why 3,306 and so he returns to his teacher and again asks, “How many Gods there are. This time he is told there are but three Gods! Being satisfied he goes away only to wonder why just three, so he returns and asks again, “How many Gods are there? This time he is told there are two Gods. Again he wonders, why just two Gods? This time he is told there are one and a half Gods! One and a half Gods, he questions? And so he finally asks and is told, “My dear son, there is but one God. Ask no more!” This sublime conversation illustrates the Hindu way of seeing the universe, simultaneous diversity and oneness.

Consequently, when a Hindu enters a church, the form of Christ is simply another manifestation of the One, a bahudha, a many. Similarly, in a synagogue or mosque a Hindu simply sees other manifestations of the One reflected through different cultural perspectives to form the many. Consequently, the almost unlimited religious streams making up Hinduism are unified under the simple idea: ekam sat viprah bahudha vadanti. The Vaishnava worship of Krishna, the Shaiva worship of Shiva and the Shakta worship of Durga are unified through the power of this simple verse. This is how the “river of Hinduism” is held together.