The dating of ancient Hinduism has always been, and will likely continue to be, a difficult issue. Prior to 1923 the only means of dating the origins of Hinduism was through textual evidence found in the Shruti Vedas. The early Aryans left no cities or other major architectural remains, therefore, textual evidence alone could push early Hinduism back to only about 1500 BCE. In 1923 a great civilization along the banks of the Indus River was unearthed, and the possibility to push the origins of Hinduism back many millennia arose. Now a great controversy rages regarding the origins of this civilization and its relationship to Hinduism. There are indications that Indus Valley culture has roots far back into neolithic times (7000 BCE), but current evidence places the active phase of this culture between 3300–1700 BCE, with its high points between 2600–1900 BCE. If a link can be made between this culture and Hinduism it could push the date of Hinduism back many more millennia than current textual evidence allows.

The center of Indus Valley culture was along the Indus River basin and its tributaries, which places most of it in present day Pakistan, but ruins of this culture have also appeared as far west as northern Afghanistan along the Oxus river and east into present day Gujarat, and even into Haryana State in central India. This covers an area the size of Western Europe and so far over a thousand cities and settlements have been located! 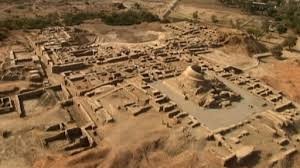 The Indus Valley people left behind an extensive set of cities and towns, the most notable of which are Harappa, Mohenjo Daro and Lothal, and through these sites it is clear that they were well organized with planned streets, elaborate bathes, covered sewage systems, water and drainage to individual homes, and even large port facilities. As in ancient Egypt and Mesopotamia, grain appears to be the basis of the economy. This is evidenced by the extensive storage structures found in most cities and towns and in particular at the port city of Lothal. In fact, the Indus Valley Civilization is the largest of the four ancient world civilizations that includes Egypt, Mesopotamia and China. Unfortunately, it is the least known because its script has yet to be deciphered. Indeed, there are over 400 distinct symbols found on thousands of pieces of pottery, seals, amulets and other artifacts, but no “Rosetta Stone,” or means of deciphering the script has yet been found, and without this it is likely that the origins of this civilization will remain obscure. This, of course, is the crux of the problem in trying to relate this civilization to ancient Hinduism.

At present there are three main theories to explain the origins of the Indus Valley Civilization and how it relates to Hinduism. The first is that it is an Aryan civilization and the script is an early form of Sanskrit. The second is that the culture is proto-Dravidian and therefore a part of the indigenous culture of the Indian sub-continent and, finally, that it has no relation to either Aryan or Dravidian culture and consequently no relationship to Hinduism. There are problems with all three of these hypothesizes. 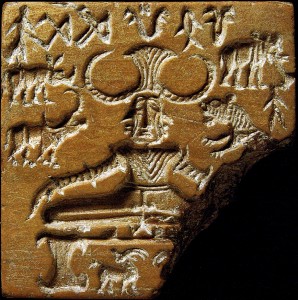 Signs of ancient remains first appeared in the Indus Valley during the 1800s when Europeans began to move through the area in numbers. In fact, bricks from this ancient civilization were unknowingly used by the British when they built the first railroads in the 1860s, but it was not until the 1920s when John Marshall, director of the Archaeological Survey of India, started an excavation at Harappa that it became apparent just how ancient and extensive this lost civilization was. Along with finds from other archaeologists, who were excavating at Mohenjo Daro, Marshall believed that they had found evidence for a new civilization that was older than any they had known before. It was originally thought that the civilization was early Aryan and the script was a form of the Brahmi script and therefore proto-Sanskrit. The Aryan theory, however, soon became rejected because the Indus culture showed no signs of the chariot, the horse, iron, ritual fire use, or other haul marks of Aryan culture described in the Vedas. Consequently, speculations grew that the script was some form of Sumerian, Egyptian, Hittite, or even old Slavic. In recent years, with the desire to show that Aryan culture was indigenous to the Indian sub-continent and not the result of migration, the theory that the Indus Valley Civilization was Aryan has again been raised by different groups trying to establish this view.

The second theory, which is currently popular, is the proto-Dravidian theory that developed during the late 1960s and 1970s by Russian and Finnish teams of researchers. They tried to show that the symbols can be derived from the Dravidian language group. Generally this language group is found in south India, but there are pockets of it scattered throughout India, particularly in northern Pakistan, which gave credence to this theory. If, indeed, the Indus culture is Dravidian in some form, it pushes the dating for the Dravidian side of Hindu culture back considerably. However, major challenges have been presented against the script being Dravidian and therefore the proto-Dravidian theory is far from confirmed.

One of the strongest pieces of evidence that is used to show either an Aryan or Dravidian link to modern Hinduism are some of the images on the Indus seals. The image of the bull, the mother goddess image and the so called proto-shiva seal are all used as proof of a Hindu connection. Unfortunately, non of these images show conclusive proof of a Hindu connection. Both the symbols of the bull and the mother goddess are common throughout the ancient world. The so-called proto-shiva shows a cross legged person sitting amongst animals, but even this has been challenged. At the present time, this is still a hot area of discussion and no matter what the various groups try to show, without a clear deciphering of the Indus Valley script there is still not enough evidence to link the Indus Valley Civilization to Hinduism or even to conclusively show that it is not apart of ancient Hinduism.

The third theory, which has been brought forth in recent years by a team of American researchers, challenges both the Aryan and Dravidian origins of the Indus symbols, and argues that the symbols are not evidence of written language and therefore there is no justifiable connection to either Dravidian or Aryan cultures. They argue that the Indus Valley Civilization was non literate and completely separate from both the Dravidian or Aryan worlds. All three theories, of course, have their proponents and opponents with interesting arguments, but the conclusion is unfortunately that we still do not know what the origins of the Indus Valley civilization were or what its connection to ancient Hinduism was.