Today one hears of yoga everywhere. People go to yoga classes for exercise and weight reduction; people do yoga meditation to reduce stress and to help sleep at night; one even hears of a yoga diet. In his classical treatise on yoga, Patanjali, an ancient yoga master, defines yoga as, “stilling the movements of the mind” (citta-vritti-nirodha). So what does exercise, weight loss, diet, relaxation and improved sleep have to do with “stilling the movements the mind”? Indeed, there is a lot of confusion regarding what is actually meant by yoga.

The word yoga comes from the Sanskrit root yuj, meaning “to join.” The English word “yoke,” as in, “to yoke a team of bulls,” is also derived from this same Sanskrit root. The word yoga is used throughout the Bhagavad Gita in the sense of “joining,” or integrating oneself with ultimate reality, call this “joining the soul with God” if you wish. So the question arises, what are the means of joining? These “means” are the different paths or forms of yoga. Throughout Hindu literature there are dozens of different forms of yoga often described as raja yoga, hatha yoga, ashtanga yoga, sankhya yoga, pranayama yoga and even japa yoga, but reduce it all down, and there are four basic forms of yoga that become the building blocks for all these other forms of yoga. These four basic forms of yoga are karma, bhakti, jnana and dhyana yogas. A person who practices one or any combination of these yogas is a yogi. Let us explain each of these four basic yogas. 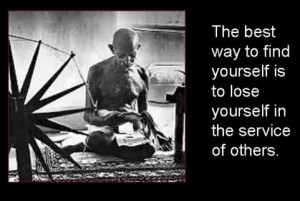 In Sanskrit the word karma simply means action. What a person does, both involuntarily and voluntarily, is karma: breathing is karma, the heart beating is karma, eating in karma, working is karma, and so on. In other words, ordinary action is karma. Karma yoga, however, is a different kind of action. It is action that brings one closer to a spiritual reality. It is spiritual action. If you recall the meaning “joining” for yoga, then literally any action that joins one to a spiritual purpose is karma yoga. In practice, however, karma yoga usually refers to working with a spiritual purpose. It is not necessarily a different kind of action, but an action performed with a different kind of attitude: seeing one’s self connected to a higher, or spiritual, purpose is karma yoga. For example, one may act as a policeman, upholding the laws of the state. This is ordinary karma, but if one adds a spiritual dimension, viewing oneself as working for God, for example, or perhaps donating a percentage of one’s wages to a spiritual purpose, such action ceases to be ordinary karma and becomes karma yoga, and a person who acts in this way is a Karma Yogi. As far as most people are concerned, the vast majority of us live as working members of society, and so the most common form of yoga is karma yoga, ordinary people performing so called ordinary works, but with a spiritual vision. There are a lot of striving karma yogis in this world and they get little recognition. Yet a yogi, including a karma yogi, in the estimation of the Bhagavad Gita, is a most exalted person. 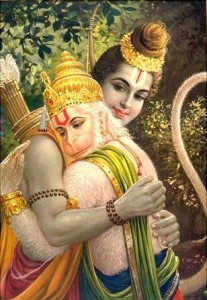 The word “bhakti” means love, and devotion. Bhakti yoga is the cultivation of love and devotion. A devotee who brings fruits and flowers, and who bowes and prays before a sacred image of Krishna, for example, is practicing bhakti yoga. A Christian who dedicates one’s self to Christ and tries to cultivate love towards Jesus is also performing bhakti yoga, devotional joining. In fact, most of the devotional actions performed in temples, churches, synagogues and mosques fall under the category of bhakti yoga. Most what one usually thinks of as being religious falls under the purview of bhakti yoga. A pious Hindu, Christian, or Muslim is a bhakti yogi.

In Sanskrit the word “jnana,” written and pronounced as gnan in most north Indian languages, means knowledge. Ordinary, so called secular knowledge, is jnana, but jnana yoga is the cultivation of knowledge with a spiritual purpose. This is generally thought to be scriptural knowledge. For example, learning Sanskrit and studying the Upanishads and other Vedic literatures would be jnana yoga. Applied to the Jewish tradition, to give some breath to the idea, the study of the Torah or Mishnah would also be jnana yoga. But jnana yoga can also include more than just scriptural knowledge. The study of the cosmos, mankind’s attempt to reach into outer space with space telescopes or robotic satellites, if done with a spiritual perspective, could also be an act of jnana yoga. A scientist who uses an electron microscope and peers down into the detailed complexity of life and who feels a sense of awe and reverence for the miracle of life and the details of physical reality, and who can sense a spiritual foundation laying behind the mystery of life, is similarly practicing jnana yoga. It all depends on attitude. Such persons are jnana yogis. 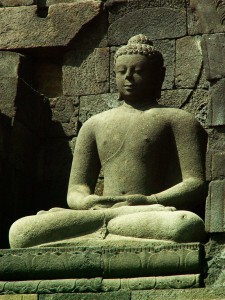 The word dhyana means meditation; it is derived from the Sanskrit root dhyai, “to think of.” Dhyana yoga is the meditation and contemplation of things spiritual. This, of course, is typified by the classical image of the meditating yogi, and in many ways, this is how most people think of yoga in general. A yogi with a large beard completes such the image! There is a popular form of dhyana yoga called kundalini yoga that many people in the West know as yoga. In fact Patanjali’s Yoga Sutras, wherein he defines yoga as, “the stilling of the movements of the mind,” falls under the category of dhyana yoga. Stopping the movements of the mind is the key to meditation. The yoga exercise classes that people attend in the modern world for weight control or stress reduction are also a part of the dhyana yoga process, which  is called hatha yoga. In order to achieve the meditative state, the body and mind need to be strong, healthy and controllable. The means to achieve this end is hatha yoga. Breath control is also conducive to mental control and meditation, and is similarly part of dhyana yoga. Breath control is often called pranayama yoga. The so called raja yoga, the royal yoga, is just a particular combination or “packaging” of hatha yoga, pranayama yoga, kundalini yoga, jnana yoga and dhyana yoga. Even the ashtanga yoga that I mentioned eariler is just another form of yoga packaging. Ashta means eight and anga means parts, so ashtanga yoga is an eight step process of yoga that is grounded in dhyana yoga. I even saw an advertisement for Vikrama Yoga recently. Vikrama means strength and courage. I let the reader consider what kind of yoga mix this might be, but you can be certain it is just another packaging of yoga.