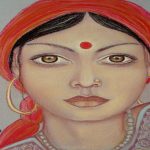 In Sanskrit the name for the marks worn on the forehead is tilaka, which literally means, “ornament.” In Hindi the word is shortened to tika. There are three basic uses for the tilaka marks: The mark worn by ladies as part of their makeup; the red “dot” that is applied during puja; and the mark worn by priests and other religious people. In a form of yoga called kundalini-yoga certain places on the body are known as chakras or places of “psychic openings.” The most important of these places is the space between the eyes just above the eyebrows. This is sometimes called the place of the third eye, and this is the main place where the tilaka is worn.

Ladies will commonly mark their forehead with a makeup mark called a bindi. This bindi is usually “stick-on” and comes in all different shapes and colors to match dress and makeup.

Similarly, during puja a priest will commonly apply a dot of red powder called kukuma at this same location to both man and ladies. Sometimes this form of puja tilaka mark is explained: God has given us two eyes by which we see the physical world, now this tilaka is a symbolic third eye by which we can see spiritual reality.

The tilaka marks worn by priests and other religious people has a completely different purpose. Essentially the lines of tilaka are sectarian marks that indicate which school of Hindu theology (sampradaya) the person is coming from. So these kinds of tikala are identification marks. There are three categories indicating the three basic grouping within Hunduism. Horizontal lines for followers of Shiva, vertical lines for followers of Vishnu and straight on marks for followers of Devi. Within each of these categories of devotees there are many variations, black lines, red lines, yellow lines, curved lines, rounded lines, and so on. Each of these configurations indicate the particular school of theology within each group, and there are many many designation even within a single group.