The idea of a guru is a misunderstood concept within Hinduism. Literally, the word guru means “heavy”. Thus a guru is a person heavy in knowledge, a teacher. In this sense a school-teacher is a guru, a coach or athletic instructor is a guru, a fine-arts or even a dance teacher is a guru. One’s parents are also gurus. In the religious field, where the word is most commonly used, a guru is a Hindu religious teacher. So a priest or any person learned in Hindu lore may be a guru. The main purpose of the guru is to teach. In the popular mind, however, there are many stereotyped images of what a guru looks like or how that person acts. Usually long hair, beards, flowing robes and lots of bowing followers come to mind, but if we just keep the idea of a teacher forefront we will not be confused. 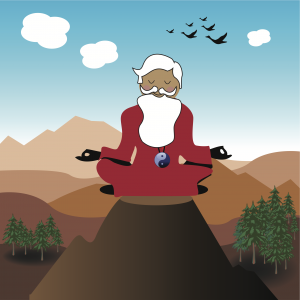 Sometimes we hear of different kinds of religious gurus. There is an initiating guru (diksha guru), an instructing guru (shiksha guru), and even the “guru within” (chaitya guru). An initiating guru is a person who formally accepts a student into a religious order or sampradaya. This kind of guru gives a mantra and other articles of initiation in a ceremony called diksha. The instructing guru is the teacher who actually trains the student. Sometimes the instructing guru and the initiating guru are the same person. The guru within is said to be the “wee” voice of God within the heart that tells a person how to act, and so on. Conscience might be the best word to describe this type of guru. In fact, it is considered that God is the original guru and all other forms of guru represent this one original guru. The expression “eternal guru” (sat guru) is often used to indicate God as the original guru.

Within Hinduism a guru is given great respect, even to the point of offering worship (guru puja). One full-moon each year (during July/August) is even called the Guru Purnima and is dedicated to the worship of guru. To have a guru who acts as the master is an essential part of spiritual growth and so to feel respect for and to want to honor one’s guru is natural and healthy. However, there is a tendency within Hinduism for the development of guru “cults” where the worship of guru supersedes the worship of God. This generally takes place when the original idea of guru as teacher becomes diminished and is replaced by the idea of guru as “blesser.” To be blessed by a guru is considered the greatest thing, but people forget that the real blessing of a guru comes in the form of study, discipline, and hard work that leads to knowledge and wisdom and not just with the touch of a hand. The idea of guru as blesser is a debasement of the true role of a guru.