Hinduism is a religious tradition that is still intimately connected to the movements of the celestial bodies, particularly the sun and the moon, and the planets. Unfortunately, most people live in large cities that obscure the night’s sky with buildings, light pollution and smog, so people hardly look to the sky anymore. Consequently, people know little about the movements of the celestial bodies which affects so much of modern Hinduism. Let us examine some of these important wheels in the sky.

The Motion of the Sun

Most people know that the sun rises every morning in the east and sets every evening in the west, but what they do not know is that the sun also has a north/south movement along the horizon. Our urban lifestyle makes it almost impossible to see the horizon, so all we can see is the sun moving over our heads from east to west. On June 21, the first day of summer and the longest day of the year, the sun rises, not directly in the east, but in the northeast. Then six months later on December 21, the first day of winter and the shortest day of the year, the sun will rise in the southeast. This may not sound like a big difference, but if one actually looks along the horizon from the north-east to the south-east you will see that it is a distance of 60 degrees, one sixth of a circle. This means that between the longest day of the year and the shortest day of the year the sun has been rising each day a little more towards the south. The sun has been moving in a southernly course along the horizon. In Sanskrit this is called the sun’s southern course (dakshinayana). Then, from December 21 until June 21, the sun will be moving in the reverse direction, north along the horizon. This is called the sun’s northern course (uttarayana). During the northern course the days are getting successively longer (light is increasing) and during southern course the days are getting shorter (light is decreasing). Actually, when the sun reaches its most northernly point on June 21st and when the sun reaches its most southernly point on December 21, there is about a three week “hanging” or “turning around” period when the sun appears to move very little. Thus the first day of the northern course (uttarayana) is not considered December 22, instead January 14th is the day, and the first day of the southern course (dakshinayana) is not June 22, but July 17th. This north/south movement of the sun is important in Hinduism since all things are considered better if they are performed in light. It is considered more auspicious to move into a house, install a sacred image, start a business, or even to die during the northern course of the sun than during the southern course. Remember the metaphor: the sun equals light, which equal knowledge, which equals consciousness. It is also recommended that temples, homes and businesses open to the east. In Vaastu Shastra the northeast direction is even called God’s corner (isha-kona). It is the best direction because it represents the maximization of light.

The Motion of the Moon and the Planets

Just as the sun moves across the sky in a daily east to west movement, so the moon and the planets also rise everyday in the east and set in the west following the path of the sun. This path of the sun across the sky is called the solar ecliptic. Imagine a huge circle across the sky that the sun follows. Everyday the sun rises in the east and sets in the west, but this is only 180 degrees of this great circle. Below us, in the dark, the sun is continuing to move to complete a 360 degree circle around the earth and then to rise in the east the following morning. This solar ecliptic is the apparent path of the sun. I say apparent because the sun does not actually move around the earth; it only appears to move around the earth from our geocentric perspective.

In a similar way, the moon and all the planets also move in an east-west motion across the sky following close to this solar ecliptic. The moon and the planets are never more than 5 degrees to either side of the path of the sun, and so everyday they rise and set like the sun. You will never find Mars or Jupiter near the north star or near the southern horizon. All the planets follow close along the path of the sun. But there is one main difference between the sun and the rest of the planets including the moon: they all do not rise and set at the same time as the sun. In fact, the moon and the planets each rise and set at different times. The moon, for example, may rise in the east at 10 AM, or 10 PM, or 3 PM or 3 AM depending on its phase. Similarly, Mars, Jupiter or Saturn will rise and set at all different times depending on their positions in their particular path around the sun. So unless one pays attention to the moon and planets, it is hard to notice who is rising and who is setting at any given time, especially during the day when one cannot see the moon or planets. In this way, above our head, there are huge circles moving in the heavens like a gigantic clock. The sun is moving in one great circle, the moon is moving in its circle, and Mars, Jupiter, Saturn and all the other planets are moving in their circles above us at all times.

Each of these separate circles closely follow the solar ecliptic to collectively create a narrow “band” across the sky that we call the zodiac. Divide this band into 12 equal parts of 30 degrees each and we have the 12 signs of the zodiac (called rashis in Sanskrit): Aries, Taurus, Gemini, Cancer, and so on.

As a side issue, it is interesting to note that as Hindus we walk around a deity in a clockwise direction and offer incense or a lamp in a similar clockwise direction. This is a symbolic gesture that follows the apparent motion of the sun across the sky as if to always follow the path of light. Similarly, the doorways to temples, homes and businesses ideally open to the east. This is also a symbolic gesture to maximize light. (see Vaastu Shastra)

The Phases of the Moon 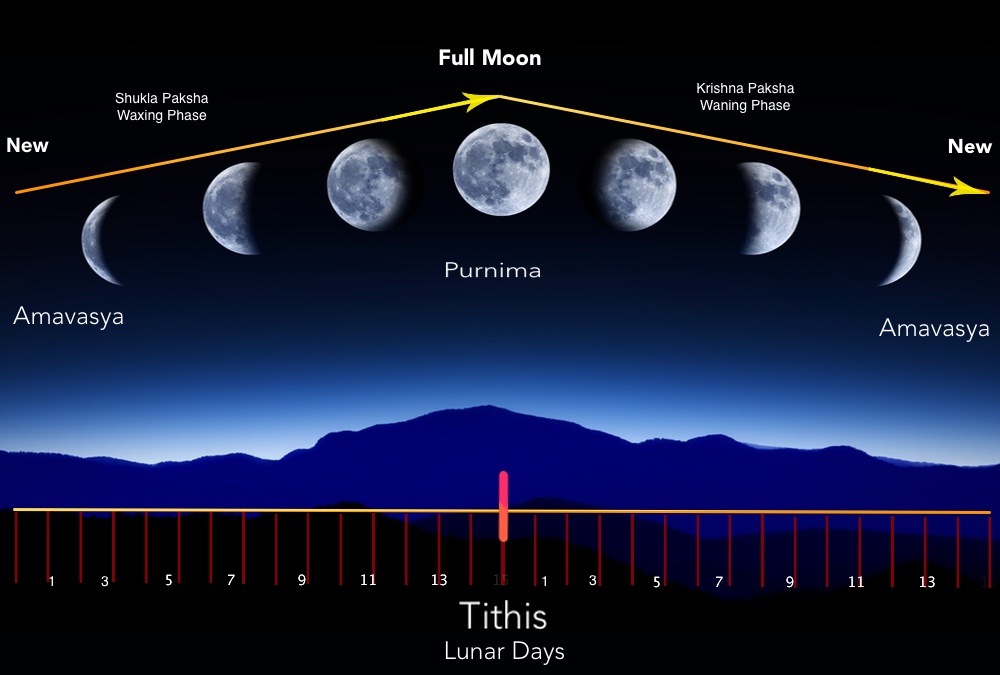 Let us assume that a lunar month is comprised of 30 days, (The actual length varies considerably, but averages out to a little less than 29 and a half days.) and let us imagine that this cycle is divided into two equal halves of 15 days each. These are called pakshas. Literally, the word paksha means a wing.( A bird is called pakshi, one possessing wings.) We can translate paksha as “side” instead of wing. One half of the moon’s cycle is when it is increasing in brightness, from new moon to full moon, which is the waxing phase of the moon’s cycle. In Sanskrit this is called the shukla-paksha, the bright side of the lunar month. The second half of the moon’s cycle is from full moon back to new moon, which is the waning phase or the period of decreasing brightness. In Sanskrit this is the krishna-paksha or the dark side of the month. Day by day, as the moon moves from its initial new moon position until it reaches full moon, and then again, down to new moon, we call each of these “days,” a lunar day or tithi in Sanskrit. In Hinduism lunar days are important and they are distinguished from solar days which are called varas in Sanskrit. In the common western calendar, when we speak of the days we mean solar days, but in Hinduism it is important to distinguish between a solar day and a lunar day. A lunar day is shorter than a solar day and starts at a different time. One of the greatest challenges in modern Hinduism is aligning lunar dates with solar dates and these two differences alone create a lot of problems.

You might expect the counting of these lunar days goes from one to thirty, but it does not. Instead, the counting of the lunar days goes from one to fourteen, then the full moon, and then again from one to fourteen and then the new moon. See the diagram above to understand the phases of the lunar month. Thus there is a first lunar day of the waxing moon and a first lunar day of the waning moon, a second lunar day in the waxing phase and a second lunar day of the waning phase, and so on. This numbering system is important because in many cases the festival days in Hinduism are named after these lunar days. One full cycle, from new moon to full moon and then down from full moon to new moon again, is called a lunar month (masa) and like the solar months there are twelve lunar months that are named after the place in the sky where the moon becomes full.

From one perspective the movements of the moon makes a good calendar because the moon can easily be tracked as it moves across the sky and because one can readily see the moon’s phases. However, there is a major problem with using a lunar calendar over a solar calendar. Just as the sun falls out of the sync with the rest of the stars a tiny amount everyday so that every four years an extra day must be added, so the moon also falls out of the sync with the rest of the stars. The moon, however, falls out of sync much more and so needs to be corrected a lot more. In fact, the addition of an extra month every 2 and a half years is necessary! The lunar year of twelve months consists of 354 solar days. However, a solar year consists of 365 days. There is, therefore, a difference of 11 days between the lunar year and the solar year. Due to this difference alone, the two calendars move rapidly out of synchronization and in about two and a half years a difference of 29 days is accumulated between the two calendars. Hence, every two and half years an additional month or thirteenth month must be added to the lunar calendar to bring it back into synchronization with the solar calendar. This additional month is called adhika masa, extra month. Some Hindu communities call this additional month, God’s month (purushottama masa) and hold special festivals during this time.