The Sanskrit name for the Hindu calendar is a panchanga. Essentially a panchanga records the movements of the sun and the moon, along with other information. Traditionally no religious festival, family event, or even a civic affair would be performed without first consulting a panchanga to know the whether the movements of these celestial bodies was favorable.

The word “panchanga” is made of two parts: pancha and anga. Pancha means five and anga means a part. The panchanga is, therefore, something made of five parts. As a calendar, these five parts are: lunar day (tithi), day of the week (vara), lunar mansion (naksatra), luni-solar day (yoga) and half lunar day (karana). A full explanation of the Hindu calendar is detailed and technical and not necessary for the general reader, but a summary understanding of at least the first three of these parts is worthwhile. For a more detailed explanation, see the Hindu Almanac.

In order to understand the Hindu calendar it will be helpful to first know how astronomers measure the sky. Just as a road map uses miles or kilometers to show distance between cities, so a celestial sky map uses degrees to show distance between celestial objects. Keeping in mind that there are 360 degrees in a circle, it is easy to measure approximate degrees in the sky. Just raise your hand to the sky, and at arm’s length, use your hand to measure the degrees in the sky. 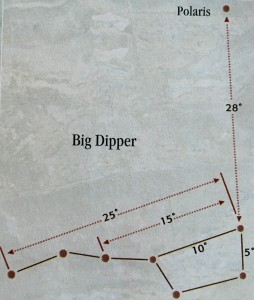 See the accompanying illustration that shows how the hand can be used to measure degrees in the sky. At arm’s length, for example, the width of the end of the little finger is about one degree across. Check to see that the full moon is half a little finger in width and therefore can be estimated to be about a half a degree wide. This system is reasonably accurate for men, women and children, since people with smaller hands tend to have shorter arms. Astronomers have used this hand technique for thousands of years to make approximate measurements of the sky. To see how this system can be used to measure a common constellation see the illustration of the big dipper (sapta–rishi) and the North Star (dhruva) to measure the degrees of separation between each star.

The first element of the Hindu panchanga is the lunar day known as tithi. This is perhaps the single most important element of the panchanga because it is the building block for the lunar month. Just as the sun rises everyday in the east and sets in the west and we call the time between one sunrise and the next a “day,” so the moon also rises in the east and sets everyday in the west and the time between one moonrise and the next is called a “lunar day.” The Sanskrit word for this lunar day is tithi. There are 30 such lunar days in a lunar month and they are sequentially numbered starting from the new moon as well as the full moon. See the diagram that shows the lunar month along with the phases of the moon. Thus, in the moon’s waxing phase, the first lunar day is called new moon (amavasya), the next lunar day is called the first tithi, next lunar day is called the second tithi, the next is called the third tithi, and so forth until the fourteenth lunar day. The day after the 14th is called full moon (purnima). From this point the numbering sequence starts over again. The day after the full moon is the first tithi, the next day is the second tithi, and so on. The important difference being that the second set of tithis belong to the waning phase of the moon while the first set belongs to the waxing phase. Afterwards the cycle repeats itself. In this way thirty tithis make up a lunar month, which is known as a masa. Some parts of India begin the month from the full moon whereas other parts begin the month from the new moon. Today, this lunar calendar is still in use throughout the Hindu world for religious purposes.

From an astrological perspective the various tithis are considered either auspicious or inauspicious for different events. In general tithis on the waxing or bright side of the lunar month (shukla-paksha) are considered conducive to growth, increase and prosperity and would be selected for such occasions as weddings, moving into new homes or starting businesses. Most religious festivals are held at these times and names of the festivals are even named after these tithis. The moon’s waning or dark side (krishna-paksha) is considered favorable for ancestor worship, and in general Hindu festivals are not held during this dark side of the lunar month, but there are important exceptions. See Hindu festivals: Utsavas

The Day of the Week (Vara)

The second element of the Hindu panchanga is the day, vara. In Sanskrit the days of the week are clearly named after seven of the nine major astrological influences used in Hindu astrology (see Nava Graha):

You can still see these astrological influences in the English names, Sunday, Monday and Saturday for the sun, the moon and Saturn respectively. If you examine the French and Spanish words for the days of the week you will see an even greater connection. Astrologically these days are named after these celestial bodies because the influence of that celestial body is said to be prominent on that day. For example, Tuesday, being ruled by Mars, the planet of war, would be a good date to start a battle, but not a good day to get married or move into a new home! Monday (moon-day) would a better day for a marriage.

The third element of the Hindu calendar is lunar mansion or nakshatra. The best way to understand nakshatra is to observe the moon some evening. Notice the moon’s position in relation to the background of stars. The next evening, at the same time and in the same location, again observe the moon’s position in relation to the background of stars. You will see that it has moved considerably towards the east. Use the raised hand technique to estimate how many degrees the moon has moved. The moon will appear to have moved about 15 degrees. In fact, the moon has moved 13 degrees and 20 minutes. The region of the sky that has been displaced by the moon’s eastward movement in one day is called a lunar mansion. In Sanskrit this is known as a nakshatra. There are 27 such lunar mansions in the 360 degrees the moon travels in one lunar month ( 13.3 x 27 = ~360). In the Hindu calendar each of these lunar mansions is named after a star or group of stars in each region of the sky. It becomes a little confusing, but this is why a nakshatra is also called a “star.” See the sample illustration of the region of the sky known as Cancer and Leo to view a segment of the sky that includes five nakshatras: uttara phalguni, purva phalguni, magha, ashlesha, and pushyami.

The nakshatra is important in Hindu culture. At birth a person’s horoscope is traditionally made, and one of the most important items to be known is the nakshatra. Many elements of a person’s character are thought to be determined by the nakshatra. (The moon stands for the mind in Hindu astrology.) In many regions of India a person’s name is based on the nakshatra. The first syllable of the name may be derived from the nakshatra. Thus a person’s existence is tied into the movement of the heavens. At the time of a puja or religious ceremony a priest may ask for the nakshatra, or “star” of the person performing the religious service so that it can be recited in the opening statement of the puja called a sankalpa. At the time of marriage, considerations of the naksatras for the both the bride and groom may be compared to check for psychological compatibility.

Luni-solar Day and Half Lunar Day

The final two elements of the Hindu calendar are highly technical and not generally used by lay Hindus and so I will only give them passing mention. They are important to astronomers and astrologers. They are called Luni-solar Day (yoga) and Half Lunar Day (Karana) and they both have to do with the relationship between the sun and the moon.

In addition to these five parts of the traditional Hindu calendar one other component should be noted, the month (masa).

The Hindu year contains twelve lunar months named after the nakshatra in which the moon is full:

Different parts of India start the year during different months. In general the year begins either in the spring time month of Caitra or in the autumnal month of Karttika.