There is a chilling reflection on the nature of life in the Bhagavata Purana: “Those who are devoid of hands are prey for those with hands; those devoid of legs are prey for those with legs. The weak are the life of the strong, for the rule holds: one living being is food for another.” Against this back drop of harsh reality, there is the principle of ahimsa, which Hinduism upholds as one of its highest ideals. The word ahimsa is derived from the Sanskrit root hims, meaning to strike. Himsa is injury or harm. A-himsa is the opposite of this, non harming or nonviolence.

Ahimsa manifests in various ways. Mahatma Gandhi used ahimsa as a powerful weapon against the British to drive them out of India and to achieve independence. Even Martin Luther King junior, after a trip to India, adopted nonviolence as the hallmark of his civil rights movement in America. Ahimsa is the basis for the vegetarianism within Hinduism and many Hindus even though they may not be vegetarian will not enter a temple or perform puja wearing leather. The principle of ahimsa can directly by derived from the concept of the modes of matter (three gunas) It arises from the mode of goodness, (sattva guna). Ahimsa is also tied into the principle to karma. Treat the universe in a less harmful way and the universe will treat you accordingly. Many followers of ahimsa apply the principle of non harming well beyond just being vegetarian or not wearing leather, but also to not even thinking or speaking in a harmful manner. The Jain religion, which is a sister tradition to Hinduism, in particular, has made ahimsa the very cornerstone of its faith. Mahavira is the founder of Jainism and one of the greatest teachers of ahimsa. 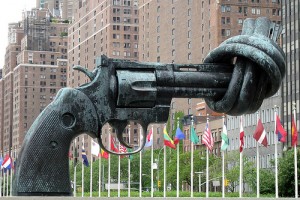 It is interesting to note that in the Bhagavad Gita, Arjuna evokes the principle of ahimsa to avoid fighting a terrible war that he knew would destroy the world as he knew it, and yet, Krishna, as God, wanted Arjuna to rise above ahmisa and extolled him to adopt an even higher principle, yoga, and fight the war as a yogi. In the end Arjuna accepted Krishna’s position and fought a devastating war where, according to the Mahabharata, millions of people were killed. Mahatma Gandhi, on the other hand, regularly studied the Gita and held it in highest esteem. The relationship between ahimsa and the Bhagavad Gita is a fascinating study in contradiction and has been a great problem for Hinduism from the earliest of times.