The general meaning of the word yantra is “a machine,” or an “apparatus” and so in this sense a washing machine, a television or even a computer is a yantra. In a religious context a yantra is a symbolic diagram that represents a Deity and is used primarily for puja and meditation. Yantras are generally inscribed onto thin copper or silver plate that shows a geometric shape, often with some numbers or even the inscription of a Deity. Virtually every Deity will have a yantra. Thus it is common to find Narayana yantras, Lakshmi or Shri yantras, Nava Graha yantras, Durga yantras, and so on. A yantra is used in much the same way as a murti or sacred image is worshipped during puja. Yantras have other uses as well. They are often placed underneath a sacred image when it is newly installed into a temple altar.

A Shri yantras, (the yantra for the Goddess of wealth and prosperity) or a Ganesha yantra (for good luck) is often kept near one’s check book or business books. Yantras are often used in astrology. If one needed to boost the influence of a certain astrological influence, the yantra for that planetary influence may be worshipped and kept on a family or personal altar. Yantras are sometimes placed above doorways or near entrance ways to homes and other buildings. See the illustrations of some typical yantras.

The shathari is an altar implement used primarily in many South Indian style temples. There is a famous temple in South India, just north of Chennai (Madras), that is dedicated to a particular form of Vishnu known as Shri Venkateshwara or Balaji for short. Modeled after this original Balaji temple, many cities in the West now have a Balaji Temple. Ordinarily most Hindus never see the shathari unless they visit this original Balaji temple in South India, but now that Balaji temples have proliferated around the world, the shathari is commonly seen.
At first look most people think that the shathari is some kind of a silver helmet that priests touch to the head of devotees, but in fact the helmet is a stand (pitha) for a small pair of shoes that are permanently mounted to the top. See the illustration above. The shoes are a symbol for the feet of God and so to be touched by the shathari is to have the feet of God placed on one’s head. This is a blessing.
The word shathari is made of two smaller words, “shatha” and “ari.” Shatha means “corruption,” “deceit” and “ego;” ari means “enemy.” So the shathari is literally the “enemy of deceit or ego,” which means that the feet of God are the enemy of bad things. In other words, the blessing of God destroys all bad things in the heart of the devotee. Ordinarily devotees will come for the divine seeing (darshana) of Balaji and in turn the priest will touch the shathari to the head of the devotee as a blessing.

Going hand in hand with religious denomination (sampradaya) are the religious marks worn by the devotees of the the various schools of Hindu theology. These marks are called tilaka, or in Hindi and many other regional languages, tika. The tilaka is a religious mark worn mainly on the forehead and is made primarily of sandal paste, clay, or ash. The word tilaka is literally a “freckle” or “spot” and it is considered highly auspicious to wear these marks. In general, there are three broad categories of tilaka marks, those worn by Vaishnavas, those worn by Shaivas and general marks. Tilaka marks are made with white, red, yellow or black colors. Vaishnava marks run vertically on the body and Shaiva marks run horizontally. The Vaishnava tilaka is the most extensive. A trained observer can tell exactly which school of theology a devotee is coming from by the color and shape of these tilaka marks. It is fun to visit a traditional holy place of pilgrimage during festival season to watch the holy men and try to read their tilaka and determine which sampradaya they are representing.

In general Shaiva tilaka is made of ash coming from burned wood, cow dung or incense. The tradition of ash goes back to stories that tell how Mahadeva (Shivaji) would smear his body with ash taken from a cremation site, and so today, Shaivas mark their bodies with holy ash. In general, amongst Shaivas, the wearing of tilaka is not as extensive or as rigid as it is in the Vaishnava schools. Here are the most common Shaiva pattern.

By far the Vaishnava tilaka is the most extensive. Each school of theology, including all the sub-sects, have their own configurations. In the modern world the wearing of tilaka was two functions, general religious identification and personal sanctification. Nowadays, the need to distinguish sectarian differences is no longer relevant. Amongst the Vaishnavas there was a time when it was considered “sinful” to wear Shaiva tilaka or to even see it. In the past the different schools of theology aggressively debated with each other over the correctness of doctrine and so, like a sports team today, the tilaka was used to identify which school the debater was representing. At one time Madhva Vaishnavas were antagonistic toward Advaita Vedanta Shaivas. Shaiva kings hunted down and even persecuted Shri Vaishnavas. Shaivas would not enter Vaishnava temples and Vaishnavas would not go near Shaiva shrines. But today such sectarian differences hardly exist, and so we see both Shaiva and Vaishnava shrines within the same temple. The function of tilaka has changed greatly. In the West only priests generally wear tilaka and consequently the  main function of tilaka is to distinguish a priest from the lay community. This function is similar to how a male Christian priest may wear a collar to distinguish himself from his congregation.

The other function of tilaka is for personal sanctification. Tilaka is generally applied to the body in twelve places (the number varies) after bathing. These places include the forehead, the throat, the heart, the stomach, two shoulders, arms, and so on. Each time a mark is applied, the name of a particular Deity is recited. This touching, marking, and evocation has the effect of personal sanctification. A priest is dedicating his body as a temple of God by applying tilaka.

The tulasi plant is a small perennial shrub in the mint family that is native to India and which is venerated by Hindus in general and Vaishnavas in particular. The botanical name is ocimum tenuiflorum or sometimes, ocimum sanctum, the sacred Basil. In Hindi and other north Indian languages the name is written just a tulsi.

There are three varieties of tulasi plants used by Hindus. There is a dark variety called syama or krishna tulasi, a white variety called rama tulasi, and an extremely hardy variety sometimes called Fujian or Thai tulasi. Many orthodox Vaishnavas do not accept this latter tulasi as true tulasi although this variety is the most common of all since it is easiest to grow. This Thai tulasi is distinguished from the two former varieties because it is much larger. The syama or krishna tulasi is the smallest variety and is the most difficult to grow.

No Hindu home is considered complete without a tulasi plant. Mostly, the tulasi is grown directly in the ground, but sometimes it is grown in a special container that allows places for lamps. See the illustration to the left. Vaishnavas worship tulasi as the Goddess Lakshmi, the consort of Vishnu and so during puja, tulasi leaves are offered to the feet of Vishnu. Lakshmi is the wife of Vishnu and so the offering of tulasi leaves is the offering of love. Tulasi leaves are also dipped in sandal paste and stuck to the feet of Vishnu during puja. 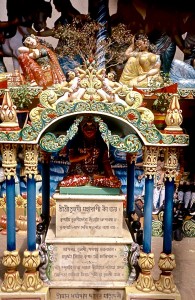 Vaishnavas carve the wood of the tulasi plant and use it for chanting beads (japa mala). It is also common to see small tulasi beads worn in strands around the neck. During the month of Kartika (October-November) a ceremony called tulasi vivaha is commonly celebrated, This is a wedding ceremony where tulusi is “married” to Vishnu or Krishna. Sometimes Vishnu comes in the form of a sacred stone (shalagram shila), so it is interesting to see a marriage between a plant and a stone! You can imagine how strange this seemed to the British when they saw such a ritual in temples without a clear explanation of what was going on. The tulasi plant is fully decorated with a wedding sari, jewelry, and sometimes even a face made of silver or hardened wheat dough. It is a fun ceremony to watch as the “parents” of both the bride and groom proudly carry their son and daughter through the paces of the marriage ceremony.

The tulasi plant also has many medicinal properties. Extracts from tulasis are used in traditional Ayurvedic medicines for common colds, headaches, stomach problems and even heart problems. Preparations of tulasi are often made into a tea or a powder or even just eaten as fresh leaves along with ghee, clarified butter.