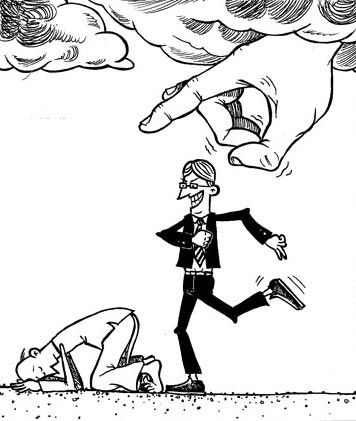 Karma is a frequently heard word that has entered many Western languages including English. The word karma comes from the Sanskrit root kri meaning “to do.” Karma is action, plain and simple, whether involuntary or voluntary. The beating of the heart, the breathing of the lungs, eating, walking, working, playing; all of these actions are karma. One also hears of good karma and bad karma, which simply refers to actions that lead to positive results or negative results. In Sanskrit, the word for result is “phala,” which means “fruit.” So the fruit of an action can be positive, negative or mixed. Perform the action of robbing a bank and the fruit may be jail. Perform the action of opening a school and the result will be education. Where Hinduism adds an extra dimension to this understanding of karma is that the results of any given karma may not only bear “fruit” in this life, but may also bear fruit in a future lifetime. Similarly, actions performed in a former lifetime may be bearing results in this lifetime. Rob a bank in this lifetime, and you may not get caught and punished in this lifetime, but in some future lifetime you will pay for the crime in some fashion. You may appear to be an inocent person put into jail in the present lifetime, but in fact you are simply paying for a crime comminted in a previous lifetime. If a person has an unexpected win-fall of good fortune in this lifetime it could be the result of some good karma having been performed in a past lifetime.

Actions that bear positive results and elevate a person are called punya. Actions that lead to a negative fruit and degrade a person are called papa. Imagine, for example, that every person has a spiritual “ledger” showing accrued punya credits and papa liabilities. A person who wins a lottery must have had a lot of punya accumulated due to many past positive actions. A person murdered must be experiencing the accumulated effects of past papa. In Hinduism people will often consciously attempt to buildup their punya assets and decrease their papa load by performing good actions, avoiding negative actions and even by performing atoning actions to wipe out negative papas. Scripture tells how fasting or giving charity on special days are particularly good for raising puny levels and lower in papa. Attending temple and receiving prasada or performing certain ritual sacrifices (yajnas) are said to even erase the effects of negative actions, papas. One’s position in life, the family one is born into, one’s economic position, one’s health and strength, and even what country one is born into and who one marries are considered to be the result of punya and papa. A person is born into a family of privilege and class as a result of great punya. A person is born into a hellish condition of war and disease as a result of papa. There are said to be heavenly and hellish realms “above and below” this earth that beings are born into as a result of high and low levels of punya and papa. The expression “seventh heaven,” for example, comes from a Hindu idea of heaven. Above this earth there are many levels of heaven and similarly, below this earth there are many levels of hell. The “seventh heaven” is the highest realm, but a heaven and a hell are never permanent. One may go to a heaven as a result of great punya, but once that punya is exhausted through enjoyment, one will move to lower levels of existence. Similarly, one may fall to a hell as a result of great papa, but once that papa is “burned off” through suffering one will begin to raise again to higher levels of existence. Earthly regions are considered middle ground where there is both happiness and suffering and because most actions are neither all good or all bad, the results are mixed. Therefore, our lives are mixed in terms of happiness and suffering.